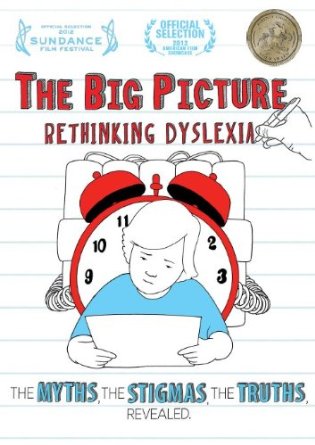 The Big Picture: Understanding Dyslexia (also known as The D Word: Understanding Dyslexia) is one of the best documentaries I have seen on dyslexia. Directed by James Redford, Robert Redford’s son, this movie approaches the subject both from an outside perspective as a documentary filmmaker and from a personal point of view as the father of a dyslexic child. The film highlights how dyslexia robs you of time because doing any task that involves reading takes so much longer. Redford goes on to show that children with dyslexia are forced to work a lot harder than their peers, developing persistence at an early age as a survival mechanism. He also contends that people with dyslexia often have a better grasp of “big picture” ideas than their peers, empowering them to demonstrate true creativity in their professional lives.

I first came across this movie when I saw an interview Redford did on the talk show Q. The video is definitely worth a watch.

The Big Picture: Understanding Dyslexia is available on Amazon and on the film’s official website.

SMARTS is a program developed by RESEARCHILD and informed by our sister organization, the Institute for Learning and Development, to bring the benefits of teaching Executive Function strategies to more learners. Copyright © 2020 RESEARCHILD. All Rights Reserved. Terms of use and Privacy Policy