What Is People-First Language? 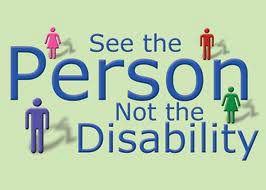 As you may have noticed from the above quote, People-First Language is most often used in conjunction with people with physical or mental disabilities; however, there is no reason not to use this language when discussing people with learning differences. I would like to see more emphasis on People-First Language when we talk about learning differences such as ADHD and dyslexia. It feels better to say that I am “a person with dyslexia” rather than “I’m dyslexic” or “I’m a dyslexic.”

This approach acknowledges the power words have on our students. If we describe a student as “an ADHD kid” or “a dyslexic,” it sounds as though this label represents everything about the child. When you use People-First Language, the issue you’re discussing seems like just another aspect of the student’s personality.

Below are some examples of preferred language:

What do you think about this approach to talking about learning differences? Do you have other examples of how we can modify our speech to better serve the LD community? Let us know in the comments!