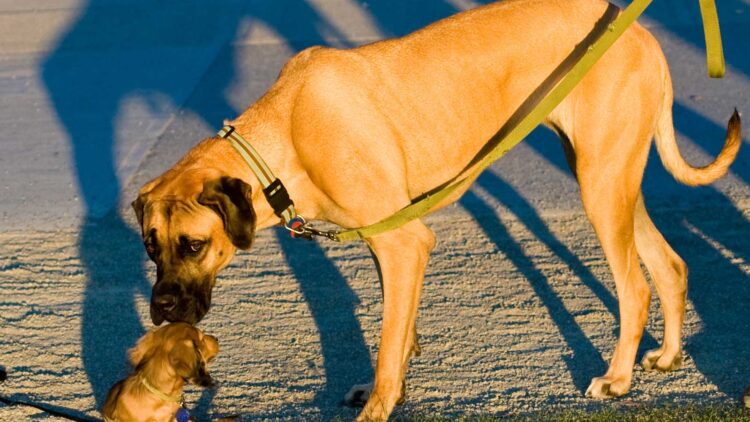 Executive function has been shown to be a crucial cognitive process for the success of humans, whether school aged or adult. But what about animals? Are our dogs at risk for executive function challenges? Can a Great Dane be more cognitively flexible than a Chihuahua?

While your dog may never be eligible for an IEP or 504 plan, it turns out that researchers have explored the executive function capacity of our pets. A study conducted by researchers from the University of Arizona’s Canine Cognition Center explored whether larger dogs, with correspondingly larger brains, were better at executive function tasks than smaller dogs. They tested 7,000 purebred dogs representing 74 different breeds.

Researchers looked at two specified “executive function” tests. In the short-term memory assessment, dogs had to be able to recall which plastic cup their owner had hidden a treat under. And in the self-control test, dogs were evaluated according to how long they could resist taking a treat they were told not to touch.

The first task tests working memory; the dogs have to hold the location of the treat in their mind and follow it as the cups move. The second test is a twist on the classic marshmallow test, asking the dogs to inhibit and wait before eating the treat.

In both tests the larger dogs outperformed smaller dogs; they were able to find the treat more often and could wait longer periods than the smaller dogs, suggesting that larger dogs are ‘smarter’ than smaller dogs when it comes to executive function. This finding is consistent with most dog owner’s experience as smaller dogs are often considered harder to train than larger dogs.

However, there are a few important caveats to keep in mind. Intelligence scores are often shaped by the tasks involved on the intelligence test. If an IQ test had a heavy reading component, for example, a student with dyslexia would score low regardless of their ‘real IQ’. Larger dog breeds were often bred to be ‘work’ dogs (such as hunting or working on a farm) so they may have evolved a brain that would excel on tests given by humans. Smaller dogs were often bred to be companion animals, so they would not have needed to perform ‘work’ tasks as often.

While the study points out an interesting facet of canine intelligence, there is more work to be done. In the next phase, the researchers of this study will be looking at size differences within the same breed to see if brain size can actually account for the difference.

As a dog owner, the results of this survey probably won’t affect you much. Some dogs may be easier to train than others, but they are all just as lovable.